[If you do not see a blue menu bar on the right, click here. You are at "Doctors' Advocacy

During the 1990's, information on circumcision became more accessible to parents with the advent of the Internet, and along with other factors, the subject has become extremely controversial, even among medical professionals. Below is information about some of the names you may have heard, read, or seen on TV.

"I think that the American Academy of Pediatrics' latest report in which they said 'We don't recommend it' is out of step with the medical facts and I think will be proved to be out-of-step with the public." --Dr. Edgar Schoen, [Pictured at right] outspoken advocate for routine infant circumcision and former head of the AAP's task force on circumcision. (He was kicked out for being too biased.)

"Throughout the last 120 years, circumcision has frequently been rationalized as the cure for the 'disease du jour' [disease of the day]. Over time, false claims were made that circumcision could prevent penile and cervical cancer, urinary tract infections, venereal disease, and if you look back far enough, even insanity, blindness, and epilepsy (among others)." --Anthony Hovenden, M.D (An excerpt from the Letters to the Editor in the July 16, 2000 edition of the Pittsburgh Post Gazette.) 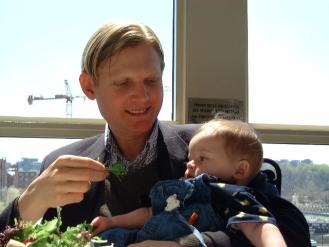 "I now have close to 6,000 primary sources, i.e., original medical journal articles that form the main documentation for this horrible history. I also collect relavant materials from popular magazines,newspapers, book, and anything that mentions this topic. I am convinced that when circumcision vanishes from medical practice, as it surely will -- and in our lifetime -- the medical institution will try to cover up the fact that they ever practiced it. I am determined that they will not get away with this. They have successfully covered up the fact that they practiced female circumcision randomly and routinely in the late 19th century and early 20th century. If you tell a doctor this, he will not believe you. I have all the documentation for this history as well. The only way we can prevent these horrors from returning is by knowing the history and broadcasting it so that it can never be repeated" --Frederick Hodges, DPhil., Medical Historian [Pictured to left: Hodges and 6-month-old Noah Gardner.]

In fact, even with the majority of boys in the U.S. still being circumcised, there is a small, yet vocal, group of male doctors who's goal seems to be to convince the general public to have their baby boys circumcised. Even after the American Academy of Pediatrics released its statement on circumcision in March, 1999 which said they found no solid medical evidence to back up a recommendation of routine infant circumcision, Dr. Edgar Shoen -previous Head of the American Academy of Pediatrics' Task Force on Circumcision in 1989- replied that he thinks that their new statement is basically "junk". Dr. Thomas Wiswell commented in the documentary It's a Boy! which aired in August 2000 on Discovery Health Channel that anyone who doesn't go along with the crowd (i.e. in having their boys circumcised and/or not believing that it is 100% beneficial) is "wrong".

"They clearly brought out that there were potential medical benefits and that every parent should be appraised of these- as well as the risks of being circumcised- and then be allowed to make their choice.... Whoever is opposed to it or who has contrary data, or whatever, they're wrong. Unquestionably, they are wrong." --Dr. Thomas Wiswell. [Pictured at right: Wiswell performs a circumcision. See "The Issues: UTI's for more detailed info on Wiswell.]

"The AAP over the years has had a policy that's ranged from wishy-washy to leaning a little one way or the other. Their very carefully-worded latest position on this... it's reasonable. And the reason I'm hesitating [is] if they really believed what they said, then they should say, 'Don't do this'." --Dr. Dean Edell. [Pictured to left]

Dr. Weiss has written a pamphlet to this effect, and has a website that is plainly pro-circumcision, and the dates of his articles are very outdated (if they were accurate in the first place) Nevertheless, here is the link to his site- appropriately part of a group called ICIRC (read "I circ."), which stands for International Circumcision Information Reference Centre- an obvious take on NOCIRC- National Organization of Circumcision Information Recource Centers. . Both these doctors have been seen on numerous television shows and news segments on the subject, along with Dr. George Denniston, head of a group called Doctors Opposing Circumcision and Dr. Dean Edell, who has a popular radio show, as well as a huge website on an extensive list of medical issues. Both Dr. Edell and Dr. Denniston speak out against infant male circumcision.

"Physicians who continue to perform routine circumcision are not only harming infants but are also harming the integrity of the medical profession. It is hard to accept that these physicians - many of whom have been circumcised themselves - are using their medical licenses to continue this contra­indicated practice. This is tragedy perpetuating itself."-- George Denniston, MD, MPH.[Pictured at right]

"From my own experience, my uncle (mother's brother) was an M.D. (he passed away several years ago) and a G.P. who delivered thousands of babies. For years he was a 'country doctor.'

"I discussed circumcision with my uncle on a number of occasions. He was dead set against them, yet he surprised me initially by saying that he did perform them. I asked if this wasn't a contradiction of his ideals. His comment was that you had to understand the mania that this country has for circumcising their sons.

"To make a long story short, he said that he always did his best to disuade the parents from circumcising, giving them ALL the information and dispelling the rumors, etc. He said that some parents didn't give a shit about the truth, all they wanted was their son's penis to be circ'd."-- Christiaan